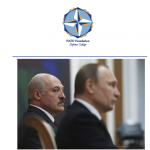 Baggiani is a historian and political scientist, specialising, as well as in the Post-Soviet area, in the affairs of the English and German-speaking worlds, with university qualifications also in International and Comparative Constitutional Law.